Celebrating the End of the Plague in Venice

Posted by Brenda on 7/18/2020 to Venice
Previous Post  Next Post
Who knew something celebrated first more than 400 years ago could be so pertinent to our lives in the 21st Century?
The third Sunday of July is Redentore, a celebration of the end of the plague of 1575-1577 which decimated the population of Venice. More than 46,000 or about 25-30% of the population died in this period.
Is any of this sounding familiar to you?
This year, the world can identify with the crisis that struck Venice in 1575. With no modern medicine or scientific research, they understood enough to know that humans passed on the disease so the doctors wore protective cloating and the famous "doctor mask". The invention of the masks as well as the protective cloak they were is said to have originated in Naples some years early and eventually became used all over Europe. They did not understand about germs, rather thought that it was the "miasma", bad air which they thought was the cause. The doctors filled the grotesque beak with herbs and spices. The masks below are sold today in the shops in Venice are are certainly not as scary. 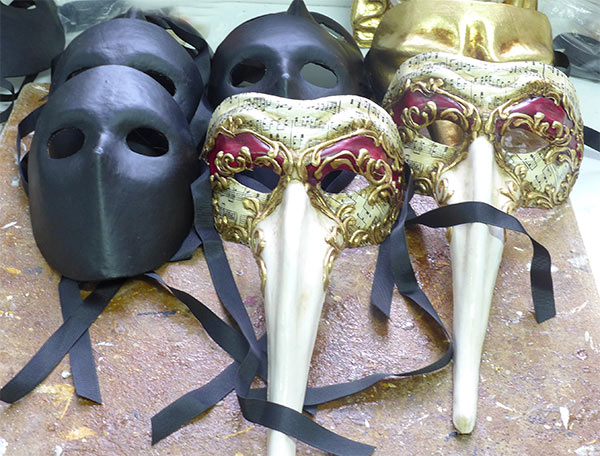 Il Redentore (the Redeemer) church was build as a votive (offering) in thanksgiving of the end of the plague. It is a magnificent church designed by Andrea Palladio, the famous architect from Padua, Italy.  It was commissioned by la Serenissima, the Republic of Venice and its cornerstones were laid in May of 1577.  Construction took some time and it was finished in 1592.
It sits on the islands of Giudecca with a perfect viewing from Piazza San Marco.
Each year since then, the citizens of Venice have celebrated the end of the plague with a solemn procession of the officials of the city (originally the Doge - now the Mayor) walk along with the patriarch of the city over a well constructed pontoon bridge. The bridge is constructed by the city and is open just in time for the long walk across the Giudecca Canal from a location just in back of the Santa Maria delle Salute (across the canal from Piazza San Marco). The bridge has a high section which still allows for the local vaporetti (boats) to pass as you can see in the picture above a vaporetto is just going under the bridge. Larger vessels are not allowed when the bridge is complete. The bridge is promptly removed during the night at the end of the 3rd Sunday and water traffic flows as usual. 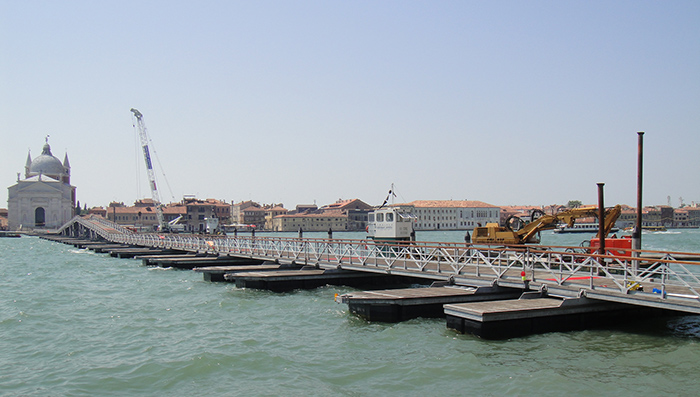 In normal years, that is years with a global Corona Virus, it is the best Venetian party ever with boats filling the basin between Piazza San Marco and Giudecca loaded with good (and of course lots to drink). The festivities begin early with preparation of food taking days. Boats begin staking our their favorite places about 3 in the afternoon. About 9 pm a magnificent fireworks show begins and there is no bad seat in the basin of San Marco. But this year with Italy just emerging from their lockdown, there were no fireworks. There were tables along the shores with locals gathered just to enjoy the freedom of having dinner outside among friends.
'Til next year, when we sincerely hope the celebration is indeed for the end of our current Virus.

Roberta
My grandparents, who were from Venice, always mentioned this feast day when I was little. I'm glad to know for sure what it is all about. I often dreamed of being able to be in Venice for it but will unfortunately continue to be a dream.
Brenda
Roberta, How fantastic that you have relatives in Venice. Your parents must have told you some great stories. The celebration of Redentore on the Saturday night is incredible. I am so lucky to work in Venice and have so many friends who are willing to share these experiences with me. As you might imagine, after sitting on a small boat talking to the people on the nearby boats, eating and drinking for 5+ hours while you wait for the fireworks to begin. Well we are all a bit tipsy! But then the fireworks begin and they light up the sky and reflect across the water. It is quite magical. And I might add that walking across the pontoon bridge is also an experience as well as visiting the chiesa with its beautiful paintings. Read our prior post with a little more details. https://www.venetianbeadshop.com/Redentore-2017_b_187.html Make your plans. 3rd Saturday of July every year!
Richard
This was so interesting to read. So much of history repeating itself these days. Everything was told beautively. Thank you!
Information
Browse By Category
Top Sellers
New Releases