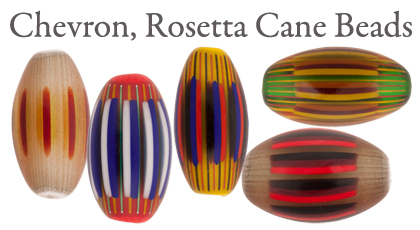 The birth of the Rosetta cane which is used to produce Chevrons owes its creation to a 14th century woman.  The daughter of an even then famed Murano Glass Blower and furnace owner, Angelo Barovier. This is a family line which continues today in Murano.
Maria Barovier was given an order of the Doge on 2 July 1487 granting her the right to produce these beads. The canes of course were produced in the furnace, but she began the cutting, grinding and finally polishing the beads. It is remarkable that the Venetian Republic recognized and supported women in this industry in the 15th Century. This, in fact, set the tone for the industry which became by and large a women's job. 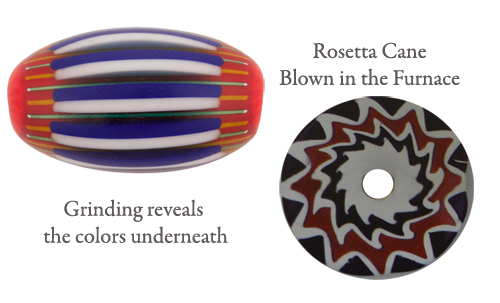 Her secret was in part, heating over a fire using a padellla (frying pan) to restore the lustre to the beads, but the colors of the beads and the beauty as today, come from the production of the glass canes.
So just how is the bead made?
It all starts in the furnace with the blowers who produce a bubble in a bullet shape molten glass. The bubble is essential as the hollow space inside becomes the hole. This was a ingenious way to produce beads which could be strung, long before bead release was invented or before lampwork was in existence. Once the blower had the bubble, he then added a second layer of a different color which he then placed into a mould, which gives you the "stars" of the rosetta cane. The glass maker could add continuous layers of colors. It was then up to the beadmaker to grind away the outer layers of color to reveal as much or as little of the interior colors.
The example above has 6 layers, and trade beads are discussed in the number of layers they have. Obviously the more layers, the more difficult both for the production of the Rosetta cane as well as for the grinding and polishing and therefore more expensive.
In the centuries after this pioneer, the tonnage of chevrons, or African Trade Beads as they became known, which were shipped is unimaginable. They were also shipped to the US in the 15th through the 19th centuries to trade with the American native Indians.
The rich bold colors used were created specifically for each market.  Many red, white and blue came to the US, while the bolder greens, yellows often went to the African market as they were designed around tribal colors. It is not unusual today to see necklaces of this vintage worn in official ceremonies.
View our collection available on line Murano Glass Chevron Beads.We have a limited supply as the canes from the earlier productions are diminishing each day. 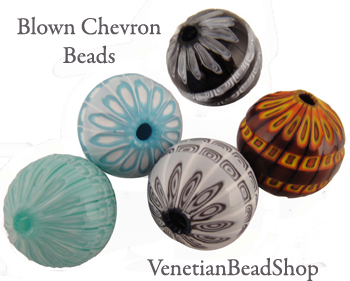 Using this same technique, our master of Murano Glass Blown beads fuses together millefiori canes, rolls them on a blow pipe and blows them. Then he carefully grinds this hollow beads to reveal the colors underneath.
Today they are still widely collected, sold at bead shows and online. We are pleased to present the collection from Claudio.
Reference: Perle di Vetro Veneziane, Una Lunga e Affascinante Storia, Giacomo De Carlo, 2013 Published in Venice.
Google
Information
Browse By Category
Top Sellers
New Releases