Costume Jewelry in the US 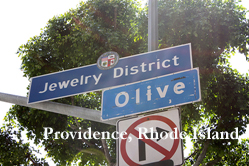 A couple of years ago when we did a bead show in Providence, Rhode Island, we became fascinated with the rich history of the area. If you make jewelry, you are all too familiar with the term "findings. Well you need look no further than Providence and nearby Attleboro to see where many of the small pieces everyone needs to make a necklace, bracelet, or earring were manufacturered. Some of the names are now famous such as Gorham, the well known silver manufacturer. It was the home to innovation of such important techniques as, soft-solder, rolled gold and seamless silver tubing with companies even today holding patents on these techniques.

The History of Jewelry Manufacturing in the US

When we think of “Vintage” Jewelry, it must bring to mind Providence Rhode Island and Attelboro, Mass, the home of the American Jewelry Industry.
Just why the silver smiths’ settled in Providence is probably a matter of convenience to the seas and boats which brought them raw materials and buyers as well. .
Famous Immigrants: After immigrating to Providence in 1784, the Dodge brothers pioneered the manufacturing of jewelry.  They are credited with inventing a less expensive process to apply a gilt of gold over a less a base metal, such as copper plate. Using silver solder he hammered and rolled it becoming the first manufacturing jeweler. This was also known as “soft solder”.
Famous Apprentice: The Dodge brothers’ most famous apprentice was Jabez Gorham, the founder of the Gorham company beginning with a small shop on Main Street, a now an internationally known company for its silver wear.
Rolled Gold: Thomas Lowe arrived in Providence in 1844 and brought with him the technique of forming rolled gold plate, which was first developed in Sheffield, England was a fusion of silver and copper, known as Sheffield Plate. Lowe used gold instead of the silver to create less expensive jewelry.
Costume – Fashion Jewelry: In the 1850s with the development of electroplating, Providence and nearby Attleboro had an hold on the technology for the production of “costume” jewelry which today continues. By 1890 Providence reportedly had more than 200 jewelry manufacturers employing a large population from Rhode Island.

Large Factories:The Luther Brothers (factory pictured on right) introduced the stud-wire machine and electroplating process for novelty items and shirt studs, buttons, badges, and numerous articles for the “findings” industry, components of earrings, backings for brooches , clasps for bracelets and necklaces.. Levi Burdon established the seamless-filled-wire production . They brought all the items we use today into production and at prices the average person could afford. No longer was fashion jewelry limited to the ultra rich.

Famous Designers: Among the early designers whose names we all recall or still see in the jewelry cases, Alfred Philippe, Marcel Boucher, Balfour (famous for class rings). The behind the scenes producers of the individual components, the jump ring, the ear wire, lobster claw still manufacturer their components used by all of us in jewelry, like Guyot and Sons who filed patents on many elements we still use, like the snap clutches and the production of filigree. The chain manufacturers were also busy producing equipment, goods and patents. 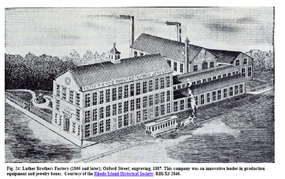 Ups and Downs: The industry suffered in all the economic downturns and wars with major blow to the industry with the stock market crash of 1929 drying up the demand for jewelry in the more expensive carat, but opening up the market in the 30’s for even more inexpensive jewelry.
Jewelry Makers to War Supplies: During WWII, the need for the metals again crippled the industry as these materials were diverted to national defense..  Many firms survived only by converting their tooling to producing items needed for the war. As many of their workers were women, they had a ready trained work force. After the war, they returned to producing intricate pieces for jewelry.
Providence Museum: The Providence Jewelry District was placed on the National Registry of Historic Place in 1985. The Providence Jewelry Museum is the work of Peter Discristofaro,  who has spent 3 decades trying to preserve the tools and history of this American industry.
Links: For more information on the Jewelry Industry of Providence compiled by Hugo Kohl watch these videos.

Hugo Kohl Workshop Video
How Jewelry Was Made: Die Sets

Bead Lady
Thank you so much for educating us on early jewelry makers.This info is new to me & very interesting!
VBS
Thanks, We can all be proud of this part of American history. Even today, many of these firms still hold the patents on certain processes and still produce.
Rachel
Amazing article! Love it. I have heard that there are warehouses you can go and visit and purchase vintage beads from in RI. Do you have information on those or the tours you can take that you can share with us?
VBS
Maybe Peter Discristofaro or Hugh Kohl (see the links above) will know. We were there to sell our Venetian Beads. :>)
Information
Browse By Category
Top Sellers
New Releases