If you remember our post card for Christmas of the tree by San Marco, here's the before and after showing you how it looked on before Christmas with all the lights and again on Dec 26, Santo Stefano isolated on an island from the high water.

The high water was announced in plenty of time for locals with the alarms being sounded well in advance of it's expected arrival. It was projected to reach its maximum at 6 a.m. and according to plans, it should have departed about 9-10ish, just in time for the stores to open (if they planned to open during the holidays). 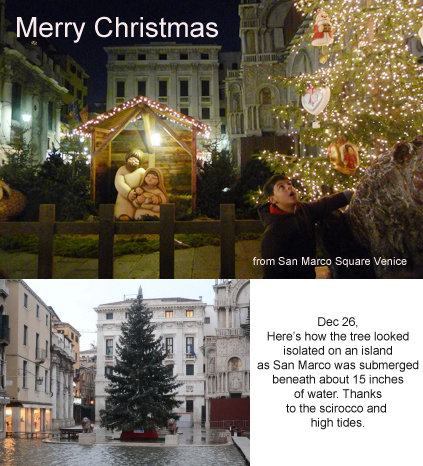 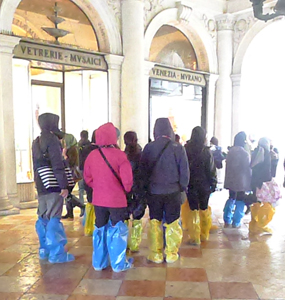 However, the scirocco (winds which push the water in the Adriatic right into the lagoon) did not subside, so San Marco remained under water for the entire day. With the altitude of San Marco at about 80cm (about 31 inches above sea level), it is one of the lowest places in the city and water begins seeping from under the pavement until the sea level is above the walls and it begins pouring in. The provision was for 115 cm. When the water projected to reach these levels, a siren alerts everyone in the city and the store owners must rush to the stores, day or night, and pick up things on the floor. After the water recedes, there is a lot of work, cleaning the mud as well as disinfecting to prevent mildew.

For More Pictures and stories of Acqua Alta:

Read Wikipedia; Read what Wikipedia has to say

High Water 10-12; It came on the day of the Venice Marathon.

The Highest in 22 Years December 2008, the water was incredibly high.

Note for Venice Travelers: If you are traveling to Venice, you might want to download the very useful app. HighTide Venice. High water in Venice should never deter you from getting around and usually last only a couple of hours. However, high tides are generally accompanied by unpleasant weather, rain and wind.

Throw-away boots are available for about 15US$ and as we heard one tourist say: The best 15$ they ever spent.

They were enjoying this amazing phenomenon in this very special city.