Incident on the Grand Canal 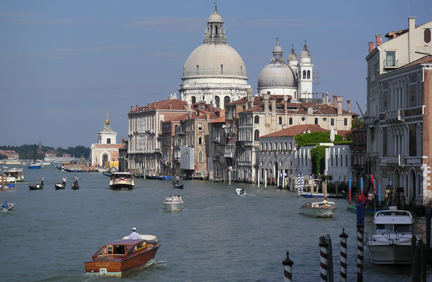 Incident on the Grand Canal:
If you have been to Venice, you have watched the water ballet of the vaporetto, taxi, delivery boats, gondola and small private boats as they orchestrate the twists and turns of the Grand Canal. And like us, you have probably marveled at the lack of collisions. The vaporetto move a very slow speed, the taxis as fast as they can without getting caught and the gondola, well it's the speed of a single person with an oar.
The chaos occurred a couple of weeks ago near Rialto when a vaporetto, the Number 1, large and slow approached the dock at Rialto. In front of him was another vaporetto departing the same dock, behind him were gondolas laden with tourist. The vaporetto had to back up to wait for the departing boat (this is normal). However, the gondola was too close and the vaporetto struck the gondola resulting in the death of one passenger and injury to others, a family from Germany.
For the family, we are all in sympathy. No one envisions sitting on in a gondola one minute and crushed by a vaporetto the next especially in a city which is the epitome of romance, glass and art. For the resulting chaos which follows, well you have to be Venetian to understand. There is a balance of roles, authority, place and position.
Like a good mystery, the final chapter is not yet written. I have waited to write about this until everything is known. The latest charge is that the gondolier had traces of cocaine and hash in his blood. A game changer if it is true. And the local police are still looking for a second gondola, reportedly to have been in from of the vaporetto, obstructing the vaporetto's ability to maneuver. 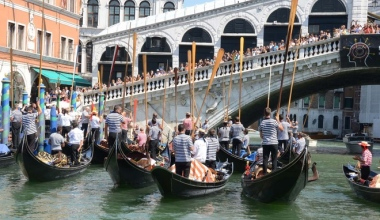 Immediately following the accident, the gondoliere were irate, demonstrating standing in their gondolas with oars pointed upward, calling names and writing scathing notes in facebook.
They were compassionate, or calculating, however you want to view it as it was mostly meant to deflect any guilt from them. They collected funds to help the family, but above all trying to push the blame to the vaporetto driver and anyone else but the gondoliere.
The ACTV, in turn 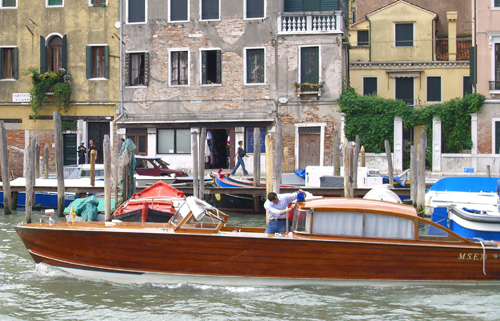 demonstrated, citing the difficulties of the summer, the cut in hours for their pilots and the high volume of tourists. The taxi drivers were silent during much of this theatrics as were the delivery (transport) companies and the local citizens.
Then came the 26 point proposal to control traffic on the Grand Canal. Among the points were the following inane ideas: Limit the transport boats to 4 am until 10 a.m.; Waste pickup only at night; Taxis limited to certain hours as well as gondolas. Eliminate certain vaporetto stops. Cut the vaporetto schedule timing, including the #2 and the Art in Canal routes. Note these two routes are only run during the high of tourist season anyway.
Now with these proposals, the locals get involved, because it started to affect them. Changing transport hours to 4 a.m. means shop keepers would have to be there to accept shipments, and individuals having work done or furnishings delivered likewise would be inconvenienced by the schedule. Imagine if UPS or FedEx could only deliver to you at this hour. Pick up of trash only at night is a noisy proposal for those living near the canals.
Cutting vaporetto service in any area is a hardship on the locals who depend on the public transportation for every need. It simply is not an option. The seasonal lines will end naturally as they always do, which are meant to help in the overflow of tourists. The proposition of a new line only for Venetian residents has been proposed, and that's not new either.
It has been a long hot difficult summer in Venice, with the latest a fight between a tourist and a local. Maybe it's better to visit Venice in the winter when tempers are cooler and the boats less crowded. Or maybe they will learn to share the road once again. 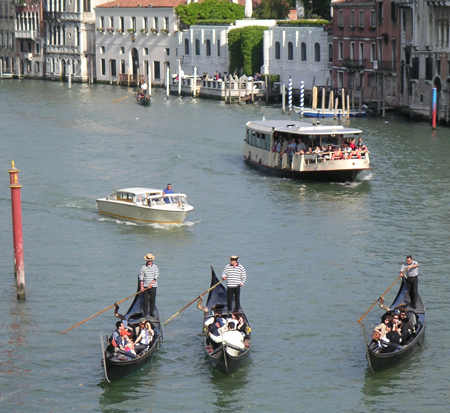 The death of the gentleman from Munich was a tragic accident and everyone agrees on this.
The last of the story has yet to be written. We'll keep you posted.
Google

Pat
We'll be in Venice on Oct 13-17 and hop hope life on the waters has calmed down. I'm hoping our tour guide can get us me to see glass blowing first- hand. I hope to come home with my own treasures. We're looking forward to the gondola and taxi rides. Always a dream! Ciao!!
ErikaS
That was interesting and I'm looking forward to the ending. Sorry for the German's tourist family, never thought of such things happening. Thank you, too for the wonderful pictures you provide. Venice is my favorite city in the whole world, I can never get enough of it.
RobynB
So sorry to hear about the tragic accident on the Grand Canal. I was thinking ... maybe if they had "lanes" specified for high traffic vehicles like the taxis and the commuter boats and the gondolas could therefore be in a slower paced lane. Kind of like the freeway, you know? I know it's difficult being a water way to make specific lanes but if you could get everyone to agree on something like that, maybe it would work.
Information
Browse By Category
Top Sellers
New Releases