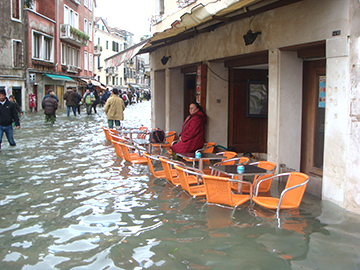 Scientists from Pauda University in Italy have once again proposed another idea for saving Venice from its flooding. They have proposed to pump water into 12 wells strategically placed around the area. The idea is to gradually pump sea water into these wells plumping up the sand and layer of clay underneath the city over 10 years to an added height of 30 centimeters (about 12 inches). There is widespread fear that such a project would not evenly increase the height damaging the already fragile ancient buildings. It seems a rather dangerous science experiment!
Meanwhile MOSES project continues in Venice to construct the a series of huge, submerged gates poised to rise out of the water and block the rising water from flooding the city. These gates secure the three lagoon openings to the Adiatic. They will lie underwater, invisible until the threat of high water arises. Air will be pumped into the gates which rise to block the openings until the sea recedes to protect for up to 3 Meter tides.
Originally planned to be completed in 2012, it now is projected for 2014 at a cost of some $7.9 billion (5.4 Billion Euro). From the locals, we hear only, "Vedere per credere!" Seeing is believing!
High water/flooding in Venice occurs only for the hour or so of max tides and then recedes. The worst flooding was in 1966 when heavy rains and the Scirocco (winds from the dry south) prevented the tides from flowing out and a second high tide arrived. Furnaces in Murano were overcome with the water instantly hardening the glass ruining the furnace cruicibles.
Again in 2008, tides of 1.5 Meters (about 5 feet)flooded 80-90% of the city. This flooding has basically rendered the ground floors unusable in many buildings, or you will see furniture and applicances sitting on stands hopefully above the water levels.
Other online references:
http://www.agu.org/pubs/crossref/2011/2011WR010900.shtml
http://www.taipeitimes.com/News/world/archives/2011/05/02/2003502232
http://www.stormchaser.ca/flooding/venice/venice_flood_control.html
http://articles.latimes.com/1986-11-23/opinion/op-12547_1_venetian-lagoon
http://www.wunderground.com/blog/JeffMasters/comment.html?entrynum=1163