That Cruise Ship Did What??? 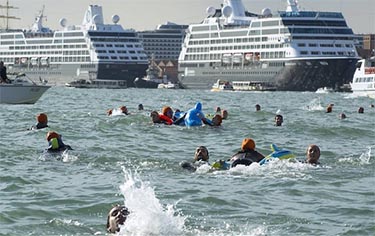 Cruise Season 2014 Opens in Venice with the arrival of the MSC Preziosa:

When cruise season ended in Venice last fall, the city was debating how many ships, what weight ships, and what routes they could take. Protesters dived into the waters to attempt to halt the boats and police were scooping them up and off to jail.

The pictures of the Monster Cruise Ship, the Carnival Sunshine, in a near miss with a vaporetto brought more tension. There are 2 sides to this story, and the photographer was accused of faking the picture.  This ship belonged to the same company as the Costa Concordia, whose tragic collision along the cost of the island of Giglio in Jan 2012 is still in the mind of the Venetians.

However, it did highlight the possibility of accidents which could destroy the historic buildings and the city built on mud and pilings of old trees, now petrified.

There is no science which understand the precise effect these ships have on a daily basis, not to mention should one of them hit the foundations along San Marco. Since these foundations began in the 900s, no one knows their exact strength or the point at which they are overstressed.

Over the winter, debates were held in Venice and in Rome to attempt to sort out the issues. The "Merchants of Venice" are on one side wanting even more cruise ships, more tourist who arrive by train, plane and bus. The municipality and the owners of the Maritime facility see only the money lining their coffers and a fair amount in their own pockets.

What do you think Rome's opinion would be if we were discussing damage to the Colosseum by a tourist mega bus weighing a hundred thousand tonnes and measuring one thousand feet? 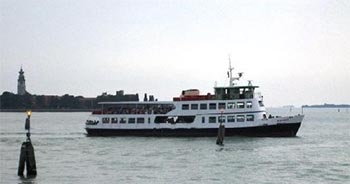 Even my Venetian friends and I are divided on this subject.  As I think there is no reason for any risk whatsoever to the city just so 3,000 people get the "view of a lifetime". You can get the same view from the top of many hotels in Venice without arriving on a behemoth. Or by climbing the tower in San Marco, or on the double decker vaporetto from San Marco to Lido and at the same time rub elbows with a few locals.

So the highly anticipated beginning of cruise season got underway this week with the arrival of the MSC Preziosa. The ship weighs 139,400 Tonnes, is 1,093 Feet Long with a crew of 1,388 and a passenger capacity of ,3,502. This monster ship travels at 24 Knots.

So what do you think happened on the "opening" day when the first ship arrived in Venice?

Especially after the assurances by the "committee" and local politicians that such an accident could never happen if they docked at San Marco.

Now I wonder who believes them?

Nancy Dyer
Venice is irreplaceable. Everyone knows that. But people become blinded over money. What will happen to their economy if the streets are constantly flooded and the buildings are falling into the lagoon? Then no tourists will come. Only smaller ships should be allowed in port. The larger ones can dock offshore. That can be their compromise. Ship traffic must be controlled. I live not far from Port Cananveral in Florida, and it is strictly a commercial area. They are constantly improving the facilities to accommodate the ships. Last I looked, the dumpy hotels in Cocoa Beach are not a World Heritage Site. Save the Lagoon.
Brigid Freeman
Actually, the ship did not hit the dock. The ship has in fact hit one of the "finger", ie the corridors boarding to passengers that give access to the upper decks.
Brenda
Yes Brigid, they hit the loading ramp, but I was not sure everyone would understand and the translation by the English speaking news of "fingers" was not accurate - the importance is that the "accident" they said would never happen in fact happened! And on the first arrival. How embarrassing for the entire cruise industry! If you read more on cruise accidents - they are a more common occurrence than they would have you believe. Check out the website http://www.cruiselawnews.com
Marge R
I was in Venice 3 years ago and saw a cruise ship right in front of me by San Marco Piazza. I was shocked. It was so incredibly close and so scary. It didn't belong in such a delicate, special place. I immediately hated it. I hope they will ban their entry soon. I live in Washington state, U.S.
Dianne F
An ounce of prevention is worth a pound of cure. I imagine it could cost billions of dollars if there ever was an accident the size of a cruise ship. Think Exxon Valdez. Just how many tourists would come if there were such an incident. Much of the loss would probably be irreplaceable both historical and human.
Shirley Knight
I am in total agreement with the municipality, the owners of the Maritime facility and Nancy Dyer above....in that only small boats should be allowed in port and the larger ones offshore. Keeping large cruise ships out of port will NOT deter tourists from coming to Venice ! It is much too unique of a city. To plagiarize from an old movie - "You built it and they will come!" :)
Information
Browse By Category
Top Sellers
New Releases