The Best Party in Venice 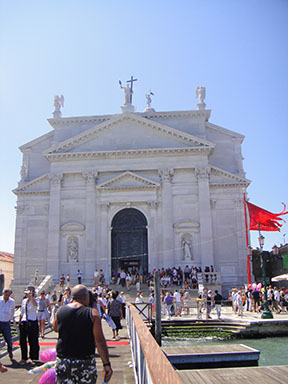 Redentore 2012, Veice Italy
The annual celebration of Redentore was a grand prodution despite the prediction of rain and thundershowers. An estimated 90,000 people watched the fireworks from the shore and boats.
However, it was not without its problems. Two days before this biggest party in Venice, the authorities announced that they would be vigorously ticketing offenders of the rules.
This made many party goes unhappy as well as the owners of the boats, transport boats, the fishing boats which come over from Chioggia (a small fishing village on the lagoon south of Venice), and even those boats which normally are reserved for hauling such things as heavy equipment are turned into floating party boats.
With the price per person in the 100Euro range, you can see why the boat owners were upset. For the party goers they provided a great service with music, and of course there's plenty to drink and eat. 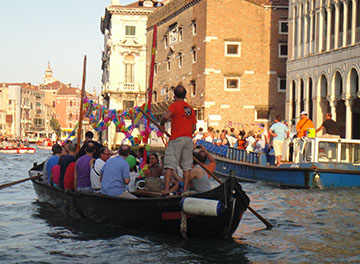 The difference of opinion resulted from the violation and ignoring of certain rules and could have been prevented by applying for a license and/or having the necessary life jackets on board. The technical issue is the Navigation Code which states that boats which normally carry good, may carry only a small number of people. Historically, this rule was ignored and without consequences, either in tickets or danger to the party goers. Actually it was probably better as they ones drinking and partying were not at the helm of a boat which there are some 1,000+ boats in the lagoon.  But in Venice, nothing can be accomplished in 2 days and the debate will go on for sometime.
But we must remember the origin of the celebration, the biggest party in Venice (for Venetians) is religious.
The church was designed the the grand architect, Andrea Palladio, opened in 1592,  to give thanks for the deliverance of Venice from yet another outbreak of the plague (1575 & 1576). It is located on the island of Giudecca and houses many famous paintings from artists, Tintoretto, Veronese & Bassano. 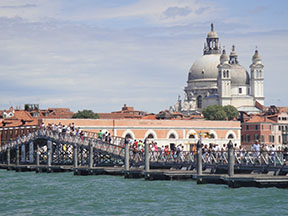 To accommodate the vast numbers of locals who make the pilgrimage to the chiesa (church), Venice constructs a pontoon bridge each year. It is a feat of engineering as they dodge the vaporetto, trash boats, tour boats and cruise ships to complete in time for the festival goers to walk home from the fireworks on Saturday night.
Enjoy a few minutes of the finale of the fireworks on our youtube channel. And should you get the chance, visit Venice for this beautiful festival. The fireworks are shot from barges in the channel and the water reflects the fireworks in an dramatic dance of the lights.The fireworks are on 3rd Saturday of each July. 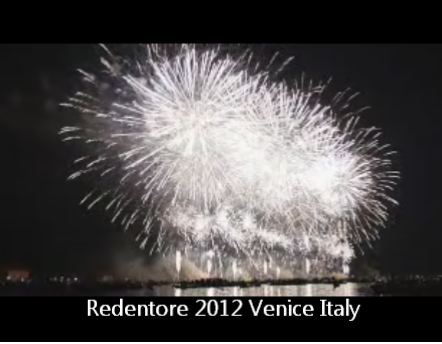