Posted by VenetianBeadShop on 7/20/2013 to Venice Travel Tips
Previous Post  Next Post
Every summer in Venice, the vaporetti become over-crowded with tourist, the boat stops jammed with people from every country, all speaking different languages and very few who know where they want to go or how to get there. Mix this with the locals who absolutely know where they want to go and unlike anywhere else in Italy, they want to be punctual. They want the boats to be punctual. But this years there is even more to complicate travel.
The problems this year began a couple of weeks ago when the ACTV, the city and company which runs the transport system, laguna and terra ferma (lagoon and land) boldly cancelled the union contracts of all the ACTV. Some had been in place for up to 40 years. However, like public transportation, public services around the world, the pension plans, the overtime, and the salary increases are causing grave problems for the cities. So, they simply cancelled the contracts! A bold move, especially for Italy. 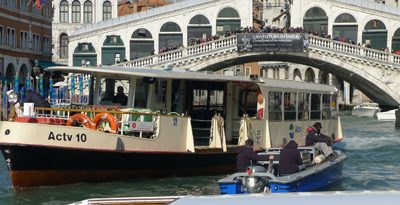 In turn, the drivers and attendants (the guys who open and close the gate on the vaporetto) are in a "slow down" mode. They have always had strike days (with no apparent reason) announced well in advance as to start and stop of the time. But now, it's random with the slow down being more of a problem. For some people who live in out of the way places, unaccessable by walking (swimming could be an option) but Guidecca, Saint' Erasmo, Torcello, Burano, other small islands and even Lido absolutely require a boat. The residents are being tortured by the scheduled boats never showing, or two in a row and sometimes not stopping.
The discussion (blame placing) is the same as in every city. Only now the ACTV, who one month ago was crying that the tourist were not taking the vaporetto and a shortage would be in the city coffers, now are complaining that the slow schedules are due to tourist who are jamming the boat stops. The residents asked for the usual "residents only" lines to be put into service, but the ACTV says it has not the money to operate these additional lines.
Last week after a couple of successively missed, boats not stopping, over crowded boats, some residents threatened to take control of the boat, in a scene which could be played in an Italian opera. La polizia (the police) were called to break up the row. Imagine a local citizen driving the vaporetto, that should be fun.
So if you are a wide-eyed tourist experience Venice for the first time, maybe it is better you walk. It is good for you. You can't get lost. And you'll see some really wonderful parts of Venice while the city and the union sort things out. And fortunately there are only a few weeks of summer left!
Google

Katy
Apparently the city of Venice has more "intestinal fortitude" than cities here in the states and good on them! Unions here in the states have held a stranglehold over municipalities and companies for far too long, causing similar situations as in Venice, and even bankruptcies of companies, like GM, or cities like Detroit.
JOAN N
Venice is my very favorite city in Italy. It is magical and romantic when you think of the history. Walking in Venice is the only way to see the city, taking a wrong turn and finding a little(bead)shop that isn't on any map. And not waiting in line for a ride is a real plus. Also I do hope that cruise ships are banned in the lagoon because this beautiful city will surely be ruined completely for others to see and share it'd magic.
Information
Browse By Category
Top Sellers
New Releases