The History of Millefiori

Did you know that glass blowing started in the middle east around 2000 years ago? Are you curious about the history of Millefiori?

In this article, you'll learn what exactly millefiori is and the history of it. Read on to discover its colorful and long history.

What Does Millefiori Mean?

Millefiori is a word in Italian that means a thousand flowers. Mosaics are more geometric designs and were made before Millefiori.

While the technique was mastered in Italy, it dates back to Egyptian times several centuries ago. The Italians also gave it the name Millefiori. The term was first used in the book called Curiosities of Glass Making which was by Apsley Pellatt. He described mosaic beads in his book. After the book, it appeared in the Oxford English Dictionary.

It's thought that the Egyptians were the ones who knew how to mix different colors of glass. This technique was then used in Rome, but it's unknown if they influenced each other.

When the term was first used, it described colorful decorations with glass flowers.

Presently, artists in Murano are still using this same technique that's centuries-old. You can find souvenirs, chandeliers, and figurines. It's one of the most popular and in-demand techniques of Murano glass making.

All Thanks to One Man

Before it was introduced to Murano, Venetian glass makers understood that the items were made using glass rods shaped in different patterns and then cut up. After being cut up they were then fused together. It wasn't easy to come up with a precise technique.

Then came along a man named Vincenzo Moretti who figured out the process through trial and error. He spent hours on end trying to figure out how to make this gorgeous glass art. He then figured out how to produce Millefiori glass which made his company world-famous. My favorite part of this story is that while they were developing their techniques for their mosaics at night, he  along with his brother worked for another glass company near the Chiesa San Donato. Vincenzo and his brother had an agreement that if they could get a contract to sell their mosaics, they would quit their jobs and start their own company. Vincenzo went off to meet the potential client, got the contract and his brother was looking through the window and got the signal as Vincenzo came back from the boat. They both quit their job on the spot.

During the late 19th century, mainly due to increased trading with Africa, Millefiori was thrived. Europeans would trade millefiori beads with Africans to impress them. They were also known as trade beads. Much of the trading occurred in West Africa and was traded for gold, ivory, palm oil, and many other goods. In the late 19th and early 20th century, these beads were mostly made in Murano. And in those days there was no telephone, no internet, no cell phone. They would receive a letter which arrived by boat in Murano requesting beads. They would prepare a quote, send if back by letter which would take 2-3 months before they heard back. Transferring funds was also difficult. The money would be sent by wire (another 2 months) and finally, with the money in hand, they would produce the order.

The Venetians were known for their trade, and Murano and it's mosaics benefited from the free flow of trade and the numerous ships sailing their waters. West Africans enjoyed these decorative beads and placed a large value on them. Africans at the time didn't have much use for hard currency. In Africa, the beads were shown as status in their community and ceremonial dress.

In the 1960s and early 1970s, since air travel had improved, many traveled around the world. For example, the hippies went to West Africa and found out about the Millefiori trade beads. They started using them as jewelry and accessories for clothing. After this, the trend caught on and it became very popular to wear it as a piece of jewelry.

How Is Millefiori Made?

It's a multi-step process to make this incredible glass art. Pots of melted glass in different colors are prepared the night before. They begin with a blob of glass on the end of a punti. The glass blower works this blob into a cylinder, then forces it into a mold, this becomes the center color of the mosaic with the shape of the mold, perhaps a star. He then takes the shape and gathers (that is the term to say you are adding glass) a second color, marvers this and pops it into a mold, perhaps a larger star. Each color you see in the cane represents a repetition of this process. It will be a round ball when they are ready and a second glass blower attaches a punti to the other side of the ball. They then walk away and like taffy, the design remains consistent. The actual size of the canes as pulled will vary, thicker towards each of the glass blowers and smaller in the center.

It first begins with a glass rod that's prepared in a special way. The semi-liquid glass paste is used on the rod. Each layer is made to have a certain shape (normally flower-like or star) and color. In this foto, Gianfranco Albertini of LaFenice Furnace in Murano is pulling along with a glassblower Claudio. Note every thing is by hand, there are NO machines that do this work. 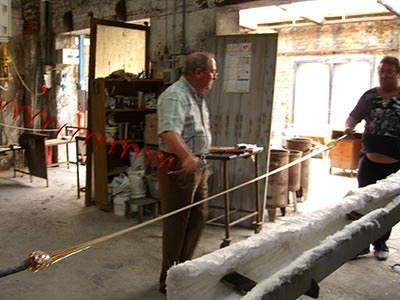 For pendants, the murrine is placed in frames of copper and placed fusing oven which melts the canes and slowly cools them down. The glass used for murrine is called soft glass and has a low melting point, and is easily shaped making it ideal for artists. Our bead makers use the slices to make beads as they work the slices into the beads over the flame. 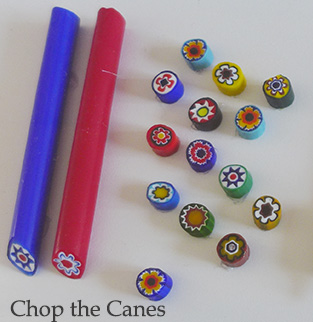 What you achieve from this are gorgeously deep colors and beautiful patterns. Today, you can enjoy this art in everything from lamps and bowls to ashtrays, rings, bracelets, earrings, cufflinks, and pendants. The prices tend to be reasonable too and offer a range.

Thanks to the internet, you don't need to travel all the way to Venice or Murano to buy your own glass art. There are of course fake products out there in the world, so always make sure that the products are made right in Murano. There is one

The Long History of Millefiori Beads

Millefiori beads extend back to ancient Egypt and Rome. They experienced a comeback through the years, and you can appreciate a similar design and beauty the ancient Romans appreciated. Would you like to have a design of beauty and history for yourself? Come check out our authentic Italian Millefiori beads today!

3.1MM Sterling Silver Round Cable Chain, Per Foot, Made in Italy